Raw materials in a laptop 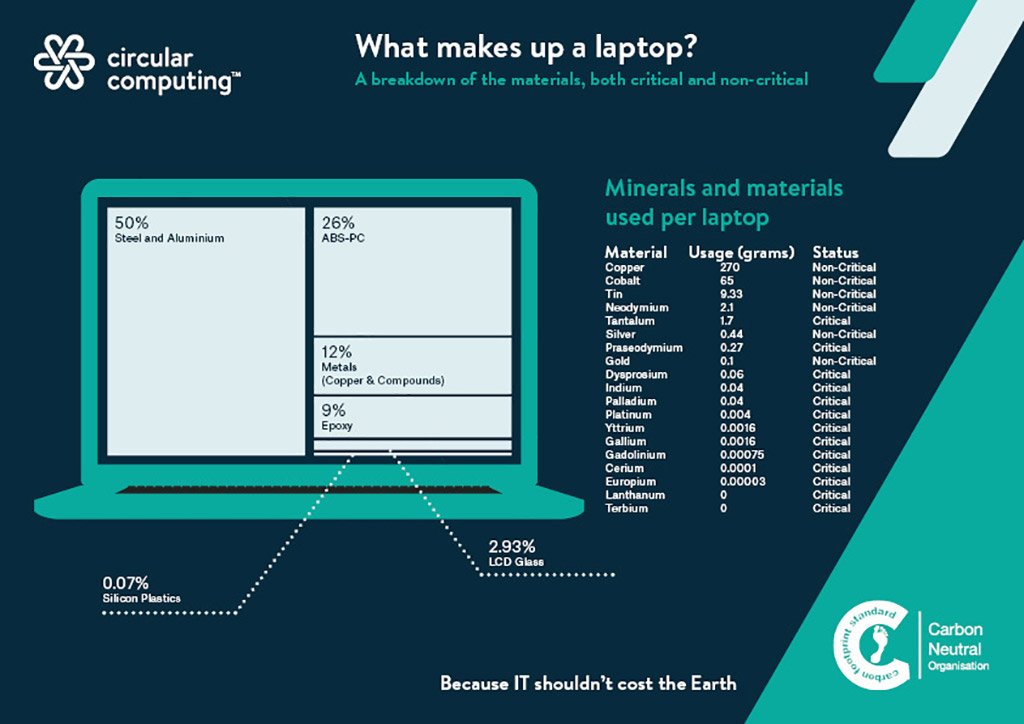 When a laptop is produced it uses up a relatively small amount of several natural resources. Some of these are in quite plentiful supply but all of them are finite. When the scale of global manufacturing is considered, these aforementioned small amounts of minerals and metals suddenly seem very significant indeed.

Another consideration is the extraction, refining, and manufacture processes to take these raw materials and turn them into laptops. Just over a third of a tonne of CO2 is produced on average for every new laptop while it also takes approximately 190,000 litres of water, itself a vital natural resource, to extract and process those materials.

Beyond the fact that our planet may run out of these resources in the not too distant future (those listed as “critical” in the infographic above in particular are likely to dry up sooner rather than later), there is genuine concern over the supply chains operating at present.

In recent years, a spotlight has been shone on the mining of Cobalt in the Democratic Republic of Congo for the pervasive use of child slavery. Whole regions are run by armed militia, forcing “workers” as young as six years old to dig for the substance at gunpoint.

With the combined economic, environmental and societal issues raised around the makeup of a laptop, the inevitable question is – is there a better way?

The answer is yes. Enterprise-grade hardware using materials that have previously been mined and processed. Machines that would otherwise have been sold on as second-hand or enter the e-waste stream are stripped down and completely remanufactured to produce a product which according to latest studies is 97% identical to brand new in terms of performance. All this without the usual high cost to customers, the environment or those most vulnerable in our global society.